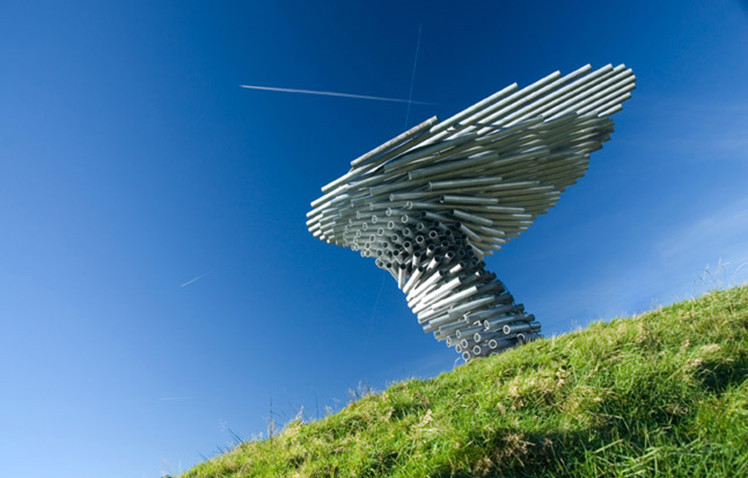 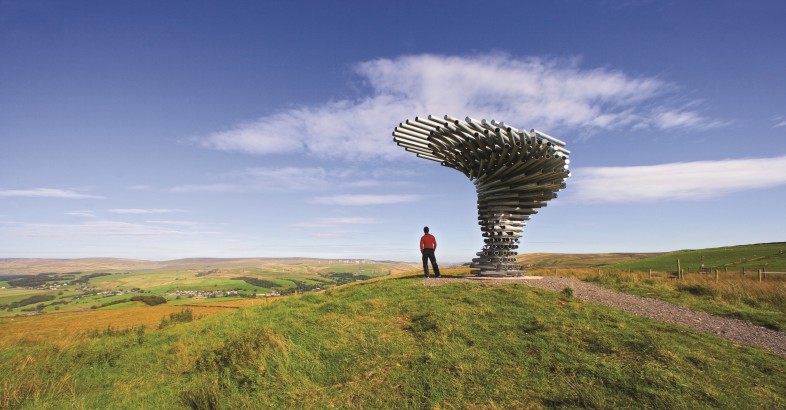 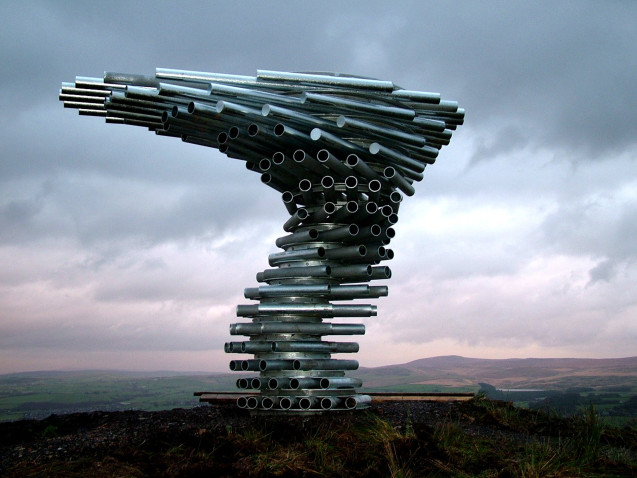 August 2015 – The Singing Ringing Tree has been chosen as one of 21 landmarks that define Britain in the 21st Century.  Hundreds of structures were voted for by the public with the final 21 chosen by a panel of experts.  Organised by The Independent Newspaper and British Airways travel magazine.  Read more here.  See information on left hand side for directions to SRT.

The Singing Ringing Tree is aptly named. A 3-meter-tall, wind-powered musical sculpture made of galvanized steel pipes, it stands high above the English town of Burnley. The pipes swirl to form the shape of a tree bent and blown by the wind, and produce an eerie, melodious hum as the constant wind on Crown Point drifts through them. The Singing Ringing Tree’s pipes are used for both aesthetic qualities as well as for tuning, with their sound varied according to length and added narrow slits on the underside of specific pipes. The sound produced by these twisted metal trees covers several octaves and is said to be simultaneously discordant and melancholy, and intensely beautiful.

Completed in 2006, the Tree was designed by award-winning architects Mike Tonkin and Anna Liu. The site at Burnley was once that of a re-diffusion transmission station, complete with a run-down brick building and unused telegraph lines. The station was dismantled and the lines cut down to be recycled, to make way for the Tree that was to stand out against the stark, rolling landscape of the Pennines.

In 2007, the sculpture won the National Award of the Royal Institute of British Architects (RIBA) for architectural excellence.

Duet No.1 for Synthesizer and The Singing Ringing Tree
John Kesson, originally from the UK, but currently based in Minneapolis, is a musician, composer and sound artist exploring the synesthetic relationships between auditory and optical landscapes.  This series of blogs documents his five day recording session and performance series at the Singing Ringing Tree.

Song for the Singing Ringing Tree
East Lancashire Clarion Choir member Henry Peacock wrote a song about SRT after the Choir climbed up there one weekend.  Read all about it here.

View our film of SRT on Vimeo.

There are lots of videos on YouTube created by people who visited the Singing Ringing Tree, You can view some of them here.

From the M65 J9 take the turning off the roundabout signposted to Burnley.  At the next roundabout take the first exit and stay in the right-hand lane.  At the traffic lights turn right (NB It looks more like a fork in the road than a right-hand turn).  At the next roundabout take the exit signposted A682 Rawtenstall.  Turn left onto Crown Point Road* just beyond the last buildings as you leave Burnley.  The Singing Ringing Tree is signposted with a brown tourist sign marked ‘Tree Panopticon’. Follow the road, over a cattle grid and keep going, it’s quite a way, until you come to the car park on your left where a gravel path leads you to the Panopticon.

* SRT does not have a postcode – however the buildings nearest the turning from Manchester Road, Burnley onto Crown Point Road have the postcode BB11 5NP.  We hope that helps those of you with satnavs!

Although SRT looks as if it is in the middle of nowhere, it is actually only about 15 minutes from the centre of Burnley by car.  There is a small car park on Crown Point Road, and from there you have a 5-10 walk on a compressed aggregate path to the tree.  The path can sometimes get a little muddy in places after wet weather and there is a short length of the path that is sloping (downhill as you head towards the tree), however the path should be manageable for most.  Get in touch if you’d like more information.

Management of SRT and surrounding land:

Please note that when SRT was completed in 2006 the management and maintenance was passed to project partner Burnley Borough Council.

Download our Free Resource Pack to make the most of your visit to SRT with nursery school aged children.  This pack was created as part of the Songs From the Singing Ringing Tree project.

Download the Wayside Arts Trail leaflet which covers a countryside walk from Towneley Park up to Crown Point, discovering the art along the trail.

(Please note that this leaflet was produced by Burnley Borough Council in 2005 and might be out of date. We suggest you check with Burnley’s Parks & Open Spaces Department (01282 425011) about any changes before setting out.)