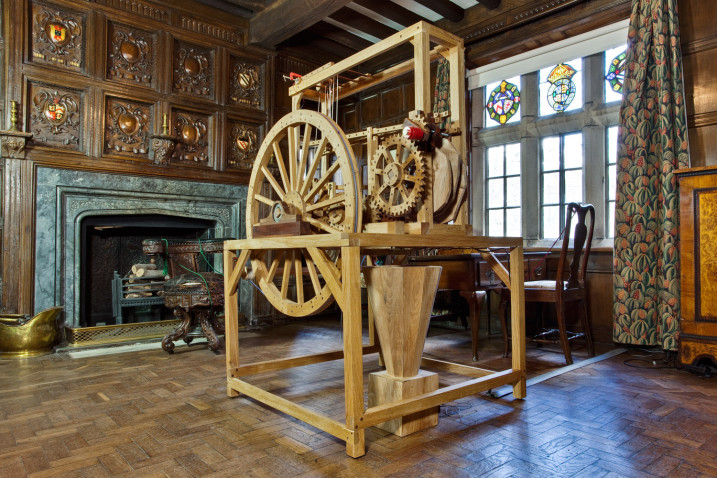 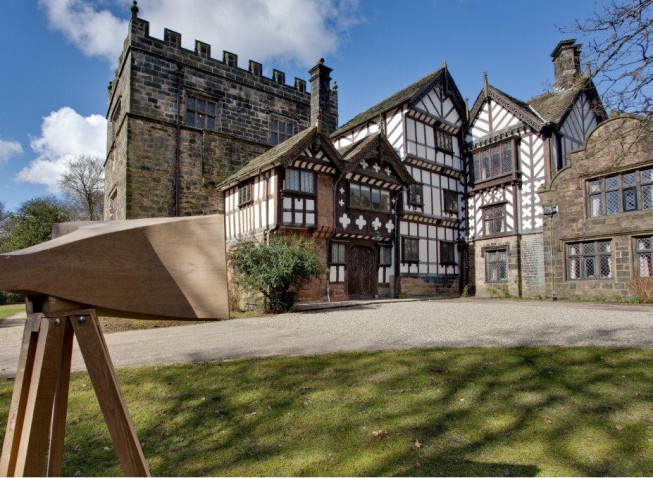 Owl Project created a site specific installation for Turton Tower. K-Scope follows on from the hugely successful ~Flow, commissioned as part of the Cultural Olympiad. Owl Project were intrigued by elements of the tower’s history that remain absent, in particular, rumours of secret tunnels and the work and the inventions of former resident James Kay.

Through K-Scope, Owl Project invited the viewer to enter an imaginary space where fact and fiction combine, and where technology develops on a tangential path to the one we see around us, encouraging reflection on our own technologically mediated world. For this commission Owl Project created two elements that linked the Tower and the garden: inside a wooden analogue computer that weaved light, and outside three fantastic listening horns exhibited in the Tower’s gardens.

“We became fascinated by the notion that James Kay had developed a series of tunnels and maybe a workshop underneath the Tower. This is not as fanciful as it might sound – if the loom riots forced contemporary inventors to hide their machines throughout their houses, then so might Kay. What is in this catacomb, we wondered?”

In the garden were beautiful wooden structures with their complex contours based on tractrix curves. Owl Project’s speaker horns invited visitors to listen in, and imagine what unseen activity might be going on underground from the sounds they could hear….

Inside the Tower, inspired by James Kay’s inventions, Owl Project drew an analogy with current technological developments; the path from weaving and early machine programming to modern computers, fibre optic communication, and even optical computing. Owl Project in effect connected these two different eras by replacing flax with light as a raw material in the K-Scope, an imagined early form of analogue computer that was in the Tower’s Library. Good at modeling real world events, analogue computers started appearing around the same time as James Kay lived at Turton. The first ones were used to predict tidal flow, working in a continuous manner rather than the discrete snapshops that current digital computers use. In terms of Owl Project practice, this new machine weaves sound from light in a similar way that their 2012 Cultural Olympiad work ~Flow, based on a floating water mill, ‘milled’ data into sound instead of grain into flour.

The K-Scope was manually operated and visitors were invited to try it out themselves. Turning the machine’s red handle controlled the speed of one of the spinning mirrors; the other was controlled by the data disks. The resulting light pattern on the cloth screen was the combined effect of the mirrors’ spin on the machine’s laser beam. No computer is complete without a sound card, and Owl Project used a system that then turns the laser light into sound, which came from the spinning laser light passing through the material of the screen. It was the very weft and weave that created the sounds, as the K-Scope was cranked into action.

To create the data disks contemporary data from the Blackburn and Darwen region was used. Owl Project imagined James Kay sitting at his desk exploring how different sets of information interact, maybe analysing his accounts, planning how to minimise injury in the mills, or possibly conducting experiments as an early pioneer of sound synthesis. The disks on the machine and in the library were labelled so visitors could see what data Owl Project had chosen.

Turton Tower is a beautiful Grade 1 listed building located in the dramatic setting of the West Pennine Moors between Blackburn and Bolton. Turton has evolved over five centuries, from a defensive tower to a family home. It is now a unique and atmospheric visitor destination, housing a wonderful collection of period furniture and paintings.

Owl Project is a collaborative group of artists consisting of Simon Blackmore, Antony Hall and Steve Symons. They work with wood and electronics to fuse sculpture and sound art, creating music making machines, interfaces and objects which intermix pre-steam and digital technologies. Drawing on influences such as 70’s synthesiser culture, DIY woodworking and current digital crafts, the resulting artwork is a quirky and intriguing critique of the allure and production of technology. See the biography…

The Owl Project are: